How the US Dollar Was the CryptoCurrency of Its Time. 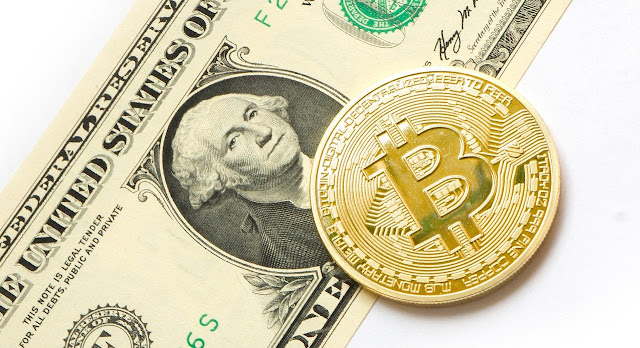 Whilst the jury remains out, a look at the Dollar's own growth and adoption as a currency may hold some clues. The Dollar itself had its own humble roots as a rival currency replacing more established ones.

Where did the Dollar come from?

The word ‘Dollar’ is derived from the German word ‘Thaler’. The ‘Thaler’ being a silver coin minted in Bohemia and in use throughout Central Europe in the 16th Century.

The word Thaler was a shortened form of the word ‘Joachimsthaler’, a coin from the Czech city of Jachymov, formerly called Joachimsthal in German.

The ‘Joachimsthaler’ was a great success as a new currency. It had been part of a revolution in European coinage which had been occurring since the late 15th century.

This desire for new coinage was a reaction to repeated debasement which had seen an erosion of the silver content of existing coinage. This debasement occurred due to rulers needing to finance the costs of virtually continual wars, and by the unremitting one-way transfer, over many centuries, of silver and gold to India and the Far East to pay for the importation of sought after raw materials, spices and fine cloth.

The continual debasement had seen the silver content in the dominant European coinage of the time drop to less than five per cent, making them worth far less than their perceived value.

Following the success of the ‘Joachimsthaler’, similar coins started to be minted from other rich seams of silver elsewhere in Europe. Soon there were many such coins in circulation.

All these new coins soon became known as ‘Thalers’.

With increasing circulation, the name ‘Thaler’ found its way into various other languages. In Dutch it was known as ’Daler' which into English became pronounced ‘Dollar’.

So there is the name. But how did it this become the dominant currency in the early United States?

During the latter 16th Century the ‘Republic of the Seven United Netherlands’ issued a coin known as a ‘Rijksdaalder’ (Dutch for ‘National Dollar’). This coin was minted to the same standards as the Thalers which were common throughout Western and Central Europe.

The Dutch also minted a coin known as a ‘Leeuwendaalder’, or ‘Lion Dollar’; it depicted a Lion, the emblem of the ‘Union of Utrecht’, the treaty which founded the ‘Republic of the Seven United Netherlands’. 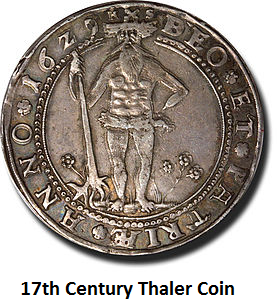 At the time, the Dutch were prominent in overseas trade, and the Leeuwendaalder’ soon became a favoured coin for foreign trade, particularly in their Dutch colonial province on the East Coast of North America.

The provincial capital of this colony was New Amsterdam, which of course later changed its name to New York. At the time New Amsterdam was protected to its north by a wall. The route of which later was replaced by a road known as ‘Wall Street’.

From New Amsterdam, the Leeuwendaalder’s usage spread to the Thirteen British colonies on the Atlantic coast of North America, where it was anglicised to the ‘Lion Dollar’, and later, the Dollar.

The term ‘Dollar’ soon came to be applied to other similar large silver coins which were practically identical in weight and fineness to the ‘Leeuwendaalder’, or ‘Lion Dollar’.

When the United States gained its independence, making a kind of 18th century Brexit, the newly independent nation chose the "Dollar" as the name of its currency rather than keeping the British Pound.

And that is how the Dollar got its name and became the United States currency.

The mighty US Dollar came from humble beginnings. Its forerunners replaced the existing predominant coinage which had been debased over many centuries by rulers to pay for the cost of international wars and to meet the cost of obligations to China and the Far East. Overtime merchants and traders preferred the new coinage mined from alternative sources until eventually it became the established dominant currency.

So whilst it took a journey of centuries for the dollar to become accepted as 'currency', in modern times, what took centuries, now take decades, and what took decades no takes sometimes just months. Who know where Bitcoin, or some other cryptocurrency is on that journey! Nothing scares leaders and presidents, than another currency replacing theirs, devaluing their wealth. What similarity could there possibly be to today’s cryptos!!!

Why not check out our recent AlphaMind podcast episode where Bitcoin expert Paul Gordon – Explains and Discusses Bitcoin for the Crypto-Curious and the Crypto-Sceptical.
https://alphamindblog.blogspot.com/2020/05/the-alphamind-podcast-paul-gordon.html 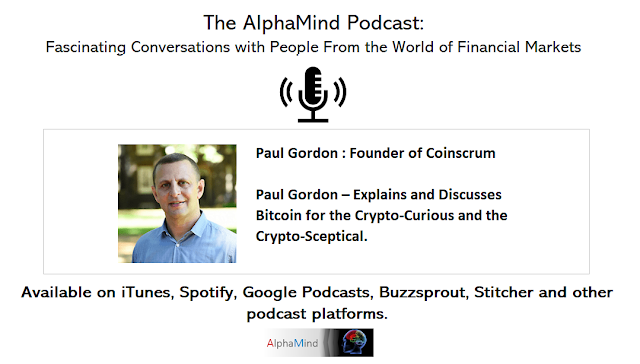 Steven Goldstein is a leading Performance, Team and Executive Coach who focuses on Risk and Financial Markets people and businesses.

Core to his work is the belief that everyone has the potential, often latent or hidden within them, to surpass where they are now and to grow into what they want to be. His work as a coach helps people to rediscover that potential, to recognise it, to value it, and to leverage it to be better, happier, and more productive.

Prior to becoming a coach Steven worked for more than 20 years as a Rates and FX trader at some of the world’s leading investment banks. See Steven's Full Profile.

If you are curious about how Steven could help you or your business, please email him at info@alpharcubed.com. or call +44 (0)7753 446097. To know more about the work of AlphaRCubed and their broader performance and growth development services, please view their brochure at this link.


The AlphaMind podcast is co-hosted by Steven Goldstein and Mark Randall, market veterans with over seven decades between them in the financial markets.

The podcast delves into the lives and stories of extraordinary guests whose experiences provide a fresh and powerful lens through which to understand the mental, emotional, psychological and behavioural challenges people face when encountering risk and uncertainty in financial markets.

To find out more visit the AlphaMind podcast website.

The AlphaMind Podcast is produced in partnership with 'The Society of Technical Analysts'.

Our powerful Trader Performance Coaching Programme focuses on helping people develop and improve the key risk skills and psychological factors, which contribute to trading performance mastery, and helps them unleash the potential they have within them.

This programme makes use of our unique and powerful ‘Human Alpha Performance Model’ which helps illuminate the human aspects of the risk process as people navigate their way through the Financial Markets. This in turn allows people to make specific changes and adjustments, in a process facilitated by the coach, which drives growth in risk capability and personal performance. – The programme also makes use of our own pioneering work applying psychometric tools to help aid self-awareness in Financial markets.

Click here to find our more about the programme, or email info@alpharcubed.com. 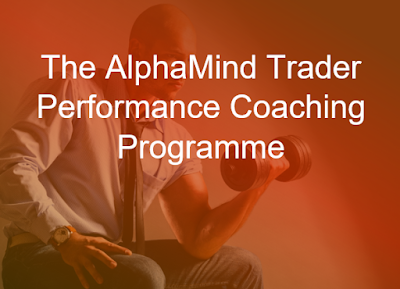 AlphaMind partner with AlphaRCubed to deliver the Coaching Programme. - AlphaRCubed provide a suite of Training, Development and Coaching programmes aimed at Trading and Investment businesses. View their flip brochure here to find out more about their work.

The AlphaMind Project and Newsletter

The AlphaMind project is a collaboration between AlphaRCubed Ltd and the Mark Randall Consultancy. Its aim is to explore, understand, educate and inform about the key factors which lead to successful trading and investment performance at the human level.

We will shortly be publishing a regular Newsletter. If you would like to add your name to the Newsletter subscription list, then just sign up at this Newsletter link.
at June 19, 2019

The AlphaMind Podcast - Jonathan Baird: Award Winning Money Manager – ‘I Have Seen the Enemy and He Is Us’.

Successful trading and investment has never been an easy task, with only very few able to encounter and navigate the turbulent waters of fin...

Listen to the AlphaMind Podcast 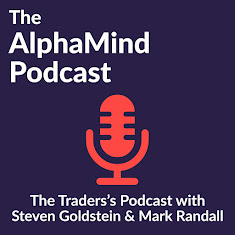 Listen to the AlphaMind Podcast